XVIII Century
Go to the Descriprion 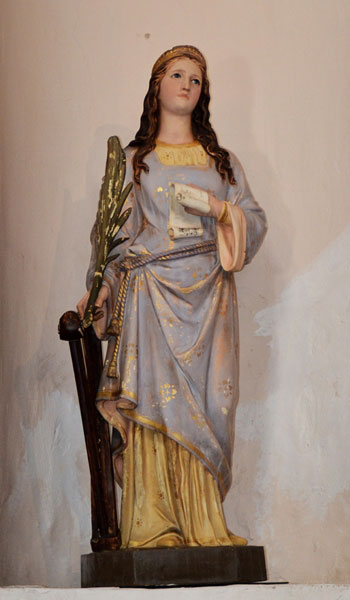 The church, dedicated to St. Eutizio, the primitive cathedral of Soriano, is located inside the town, in the ancient district of the fortress. Built in the medieval period, it underwent numerous changes in the Renaissance period, but its current appearance is due to the Albani, who had the building renovated around 1718.

The church, dedicated to St. Eutizio, the primitive cathedral of Soriano, is located inside the town, in the ancient district of the fortress. Built in the medieval period, it underwent numerous changes in the Renaissance period, but its current appearance is due to the Albani, who had the building renovated around 1718. The following remains of the original construction: the cusped bell tower (15th century), about 34 m high, with two orders of mullioned windows and traces along the perimeter walls and in the apse.

The façade, in masonry and in a single order, has architectural elements in peperino, such as: plinth, pillars, cornice, tympanum, portal and large window; the latter, which opens at the top in the center, protected by a balustrade with pillars, is surmounted by the coat of arms of the Albani family.

Going beyond the entrance door, you can see two tombstones, one on the right and one on the left. The first, in white marble, the origin of which is unknown, was placed in the church of Sant’Eutizio through the interest of Mr. Eutizio Narduzzi. Above there is represented the coat of arms of Pius VII Chiaramonti. This is the translation of the Latin inscription: “In the year of regained freedom 1815, on April 20. Having been forcibly removed, by order of Napoleon, the goods from the association of the Discipline, the question was resolved by order of Pius VII, Pontiff Maximus, to whom Pennazzi himself appealed at the request of the same Brotherhood, (disposition) issued on the day September 10, 1814, of which the essential content is summarized with these Italian words: the Confraternity of the Discipline be maintained in the peaceful possession (of its goods).
The other inscription is a fragment of a medieval tombstone, placed upside down.
The building inside consists of a single room, which flows into an apse, adorned on the side walls by a series of small chapels.
Next to the entrance, on the right side there is a plaque which, commemorating the “tenth fiftieth anniversary” of the discovery of the bones of Saint Eutizio, shows the names of the porters of Soriano.
On the first right altar, enclosed by an architectural frame decorated with elegant stuccos, there is a painting depicting the Saints Omobono and Crispino. Above is the altarpiece, of uncertain attribution, with the Virgin Assumed into Heaven, St. Bartholomew seated in the shade of a tree and St. John the Evangelist.
A glass-enclosed niche holds the statue of Saint Lucia, the patron saint of Syracuse, who holds lilies in one hand and a plate with her eyes in the other, a symbol of her martyrdom. Next to the effigy of the Saint some ex voto have been placed.
The second chapel on the right, also decorated with stucco, has an altar surmounted by a gilded medallion, supported by a carved decoration, with the image of the Sacred Heart of Jesus. Above, a gold frame surrounds the canvas, of which no knows the author, with Santa Lucia, Sant’Antonio abate and Santa Caterina d’Alessandria.
A door separates the third altar from the others. The latter is characterized by the painting with S. Tarcisio and the altarpiece with the Saints Quattro Coronati (Severo, Severino, Carpoforo and Vittorino). The altar was once under municipal patronage, as the Ss. Coronati were patrons of Soriano.
At the back of the church, on the sides of the apse within two niches obtained from the wall, there are two wooden confessionals.
The most interesting part of the building is that of the presbytery, where a precious marble balustrade divides the apse area from the rest of the church. The main altar is decorated with a frontal with yellow and black marble inlays and houses the urn of St. Vincent martyr inside; the finely carved tabernacle is a splendid example of Baroque art. In the center of the apse, within a frame of painted stucco, you can admire the painting with the Martyrdom of St. Eutizio, dated “Rome, 1861” and signed Jacques Pilliard. To close the architectural section, at the top, is the decoration with the Dove of the Holy Spirit that appears in the sky, giving off rays of golden light between clouds and a group of angels. Painted stuccos are also used at the height of the cornice. Observing the left aisle, you can see the third chapel at the end, enclosed by stuccoes; below on a polychrome marble altar there is a painting with St. Joseph and the Child Jesus. Above is the altarpiece with the Annunciation of the Virgin Mary, made by the artist Stefano Pozzi in the 18th century. A plaque, with an inscription in Latin, states the following: “Alpha, Chrismon, Omega (= Christ the beginning and end of all things). Here in peace Giovanni Battista Febbri was deposed, canon (of the church) of S. Eutizio martyr for 51 years, who, a good friend, lively in conversation, was very nice to everyone. He died on December 2, 1872, honored by the tears of the poor, to whose needs, while he lived, he met propitiously. He lived 80 years, 7 months and 25 days. Sorrowful Nicola placed (this plaque) to his excellent and beloved brother “. The second left altar is surmounted by the altarpiece with Jesus Crucified, the Virgin, St. John and the Magdalene, by an unknown artist.
St. Eutizio is remembered through a statue, kept inside a niche open on the left wall and closed to glass. The Saint is represented here with the palm, symbol of martyrdom. Finally, the first altar shows a painting with the Holy Family and within a stucco frame the 18th century canvas with S. Giuseppe, S. Carlo Borromeo, S. Antonio da Padova and S. Francesco Saverio. One of the most valuable works inside the church is the marble olive oil performed by Andrea Bregno in the fifteenth century and later used as a baptismal font: consisting of a small architectural façade with a tympanum, it has ornamental motifs carved in bas-relief, including the dove of the Holy Spirit, the baptism of Christ and two praying angels. In front of one of the side entrance doors is the splendid wooden crucifix dating back to the seventeenth century. The counter-façade of the church is adorned by the choir, on which the seventeenth-century organ is placed, restored in 1990. Stucco decorations appear almost everywhere inside S. Eutizio, in particular there are present on the ceiling where oval ornaments prevail. they are connected to the lunettes of the large windows of the side walls. Among others: little angels, festoons and pilasters with Corinthian capitals. The eighteenth-century canvas with the Virgin Mary, attributed to Sebastiano Conca, is kept in the sacristy.

CHURCH OF THE ORPHANOPHY
7 October 2021